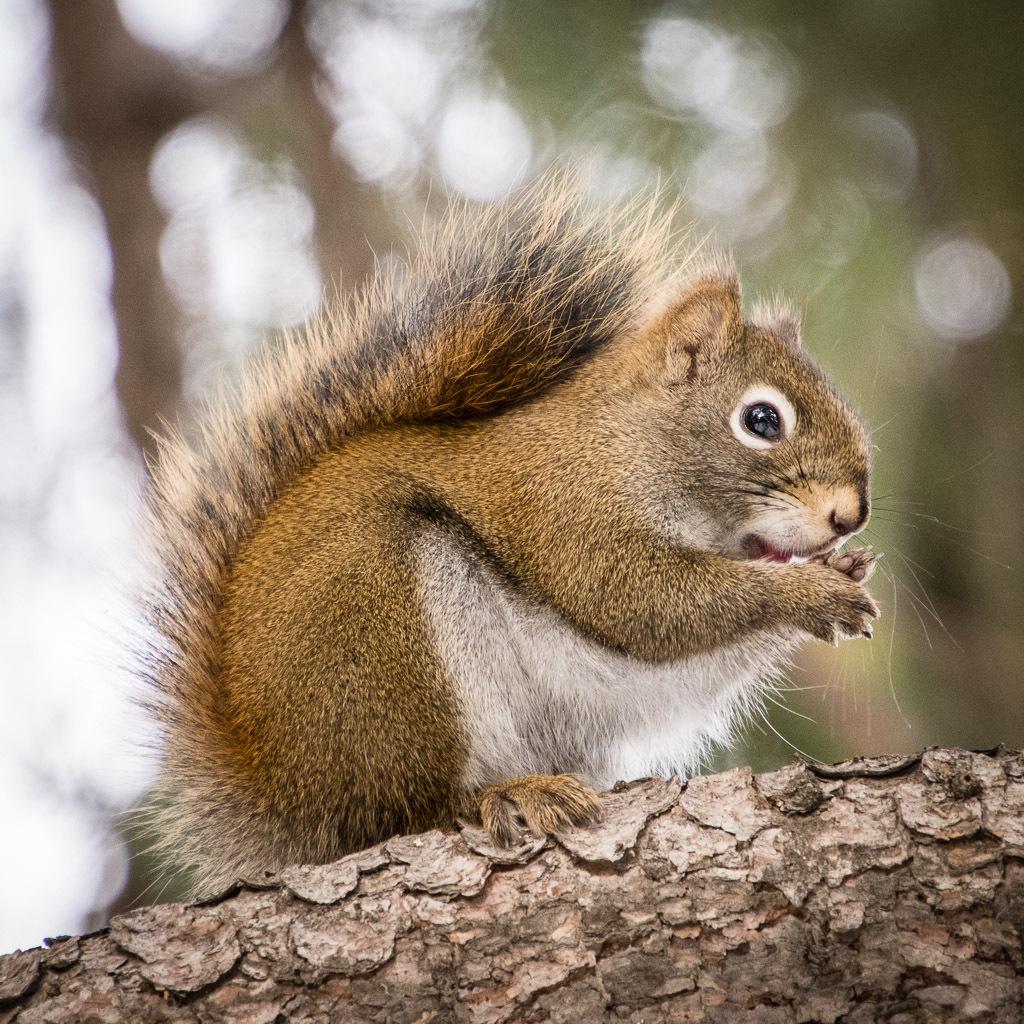 North America is home to 5 different types of squirrels. The animals we most commonly think of as squirrels live in trees, but there are ground-dwelling squirrels such as Least Chipmunk as well. Tree squirrels are most commonly found in coniferous forests, but you’ll also find them in city parks and gardens. Their bushy tail is half the length of their body and is used for balance and to keep them warm in winter. Squirrels eat lots of pine cone seeds and nuts but also flowers, berries, mushrooms, insects, and eggs.

The American Red Squirrel can be found from southern Alaska right across Canada as well as in the northeastern United States, around the Great Lakes, and south through the Rocky Mountains as far as Arizona and New Mexico. They are often found in White Spruce forests as they really enjoy the seeds. Red Squirrel (11-15 in from nose to tip of tail) have reddish fur with a white belly and a white circle around their eyes. Their strong claws and sturdy back legs make them good at running and climbing through trees.

Gray Squirrel (also known as Eastern Gray Squirrel) are much larger (15-21 in from nose to tip of tail) than Red Squirrel. They are most commonly found in northeastern North America but have spread to parts of the west coast. The color of their fur varies from black to gray to reddish-brown. Gray Squirrel in Ontario and Quebec are often black. This is less common further south. Red and Gray Squirrel are active during the day and don’t hibernate in the winter, except in the far north.

Flying Squirrel (12 in) can be found in coniferous forests across Canada, south to the mountains of North Carolina, and in Washington, Oregon, and Utah. They have large eyes that make it easier for them to see in the dark as they are active after sunset. A loose fold of skin between their front and back legs allows them to glide up to 65 ft.

Fox Squirrel (18-28 in) are North America’s largest tree squirrel and can weigh up to 2 lbs. They are found in the eastern United States, the Great Plains (from southern Canada to the Dakotas, Colorado, New Mexico, and Texas), and parts of the west coast from Washington to California. They are active during the day in pine and oak forests with very little growth at ground level. Their fur color varies considerably depending on the region. Their tail and belly are often orange-brown (hence their name).

Did you know? Red squirrels store food away for the winter, marking each hiding place with a special scent. They can use their sense of smell to locate pine cones under as much as 12 inches of snow.