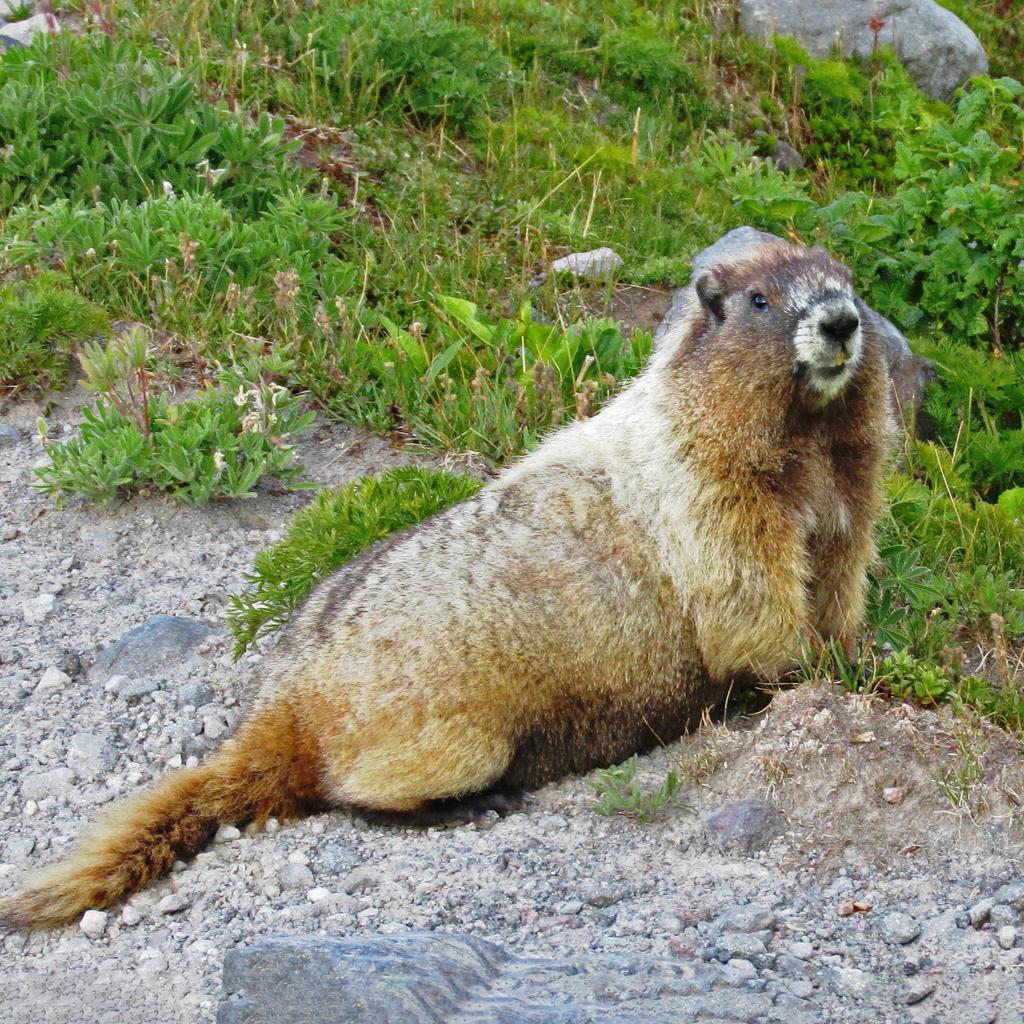 Marmots are large, bulky ground squirrels with short legs, a thick fur coat, and large teeth and claws. They can be found in mountainous areas and often, but not always, live in family groups called colonies. They build burrows under rocks where they raise their young, hide from predators, and hibernate (from September to April in cooler climates and for less time in warmer areas). Marmots spend their days above ground where they lie in the sun and graze on grasses and herbs. They build up large stores of fat during the summer but will still lose a significant amount of weight during hibernation.

Hoary Marmot live at or above the treeline in the mountains of British Columbia and Alberta. They are large and bulky (18-22 in long, up to 16 lbs) with light brown fur that is white over the upper back and shoulders. Hoary Marmot live in colonies with a dominant male, several breeding females, young, and sometimes a few subordinate males. They build a burrow, often under a boulder, with several chambers, tunnels, and multiple entrances.

Yellow-bellied Marmot are smaller (19-26 in long, up to 11 lbs) than Hoary Marmot. Their back and bushy tail are various shades of brown, while they have a lighter yellowish-brown fur down the sides of their neck and on their belly. They can be found at lower elevations in the mountains and Cypress Hills of British Columbia, Alberta, and Saskatchewan.

Vancouver Island Marmot can only be found in a couple of mountainous areas north of Nanaimo on Vancouver Island, British Columbia. They are the size of a large house cat (22-28 in long, 10-16 lbs). Males are larger than females. They have dark chocolate-brown fur with white patches on their nose, chin, forehead, and chest. Vancouver Island Marmot are extremely rare and came close to extinction. Recovery efforts have been successful and, from a low point of 30 animals, there are now over 200 spread between 20 colonies.

Did you know? Marmots use noises to communicate. They whistle to alert the others of danger, scream when they're scared or excited, and chatter their teeth as a threat. Hoary Marmot are also known as Whistlers and Whistle Pigs because of the high-pitched sound they make to warn other marmots in their colony of predators.