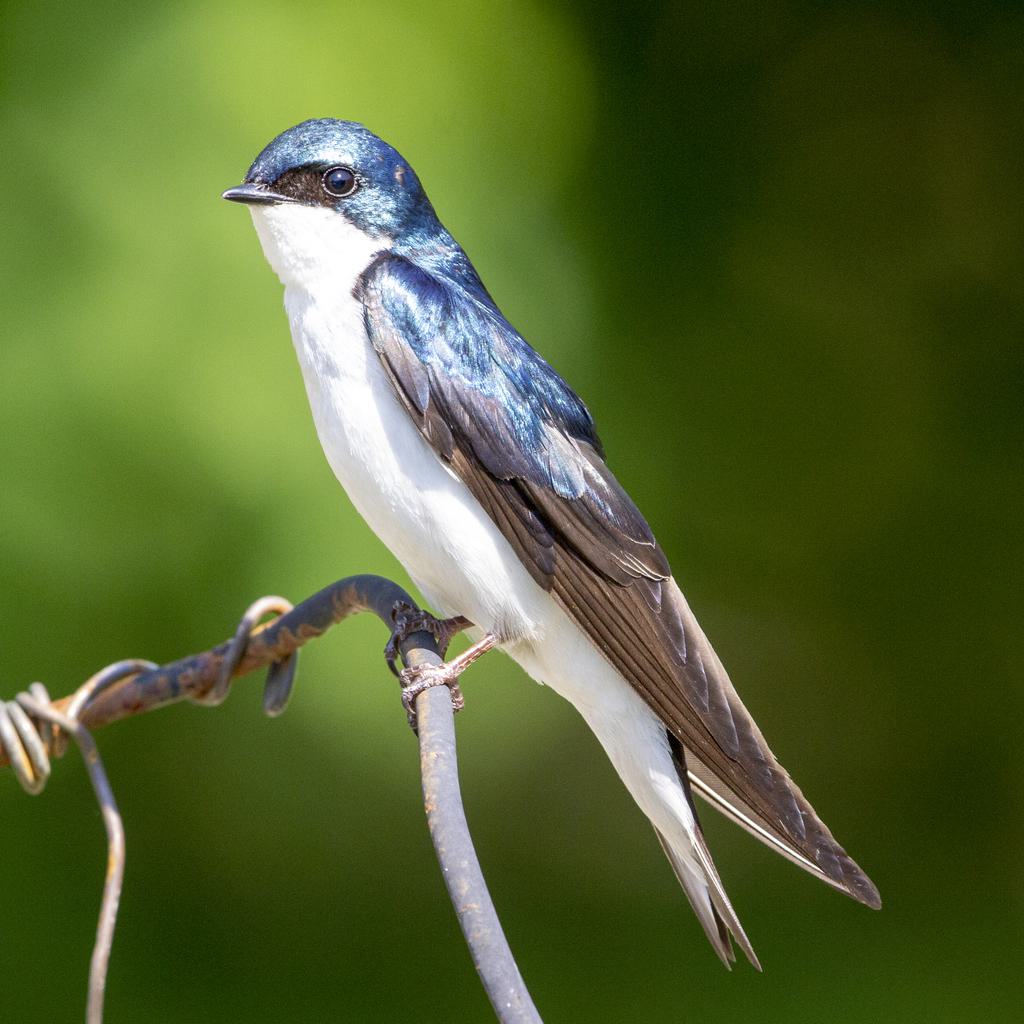 Swallow are small, slender birds with long wings. They are adept at catching insects as they maneuver easily in the air and have great endurance. Two collections of light receptors in their eyes give them sharp front and side vision. They can be found on every continent except Antarctica in areas where there are plenty of insects, either near water or over open fields.

Barn Swallow are the largest and most common swallow found in North America, migrating to the southern hemisphere for the winter. They are the size of a sparrow (7 in long, 12 in wingspan) with a dark blue back, wings, and tail and reddish-brown throat and underparts. Their deeply forked tail makes them easier to identify. They feed in open areas from fields and parks to marshes and coastal areas. Barn Swallow build cup-shaped nests from mud and grass on the undersides of eaves, picnic shelters, bridges, and other man-made structures.

Tree Swallow have a bright blue-green back, dark-colored wings and tail, and white throat and underparts. They are smaller than Barn Swallow (5-6 in long, 13 in wingspan) and don’t have a forked tail. Tree Swallow spend their summers in Canada and the northern United States, wintering in the southern US and Central America. They nest in tree cavities or nest boxes and spend most of their time near water.

Violet-Green Swallow can be found in the west from Alaska, down through BC and Alberta, to Arizona and New Mexico. They are smaller (4.5 in long, 10.5 in wingspan) than Barn and Tree Swallows with a green back, a purple rump, and a white throat and underparts. They breed in open woodlands, searching for insects over lakes and streams. They can fly very fast and are extremely agile.

Bank and Cliff Swallows nest in large colonies. Bank Swallow use their beak and feet to dig out a nest burrow in the side of a gravel pit or riverbank. Cliff Swallow collect mud in their beaks, form it into balls, and press them together to make a nest in sheltered spots on cliffs, buildings, or bridges.

Did you know? Tree Swallow are the first swallows to return to their nesting sites as they don’t migrate as far south as other swallows. They eat berries to help them survive in the colder months when there are less insects.